BOERNE - The Boerne Star reports another start-up brewery in the planning stages in Central Texas, the Boerne Brewery, in the piece "New brewery to reflect unique Hill Country Heritage."

Owner and brewer Fred Hernandez will build and operate his tiny brewery from property he owns in Boerne. He anticipates brewing and bottling commercially by this summer.

Posted by assurbanipaul at 3:42 PM 3 comments:

Email ThisBlogThis!Share to TwitterShare to FacebookShare to Pinterest
Filed as: Boerne, Boerne Brewery

FORT WORTH - The damage due to the roof collapse at the Rahr & Sons brewery is more extensive than initially reported.


Estimates place roof repairs at 60 to 90 days for the building structure alone, with evaluation of the brewing and bottling equipment still pending access to the facility. Water damage throughout the brewery was extensive, with as much as a foot of standing water resulting from an open water main.

All bottled stock was taken immediately by Coors Distribution, and the product remaining in the fermentation tanks will have to be evaluated. Rahr is expected to be out of operation for at least three months, with their Saturday and Wednesday brewery tours and tastings cancelled until further notice.

Retail shortages of Rahr & Sons beer may occur in the short term, but the losses and repairs are expected to be covered by insurance.
Posted by assurbanipaul at 5:19 PM No comments: 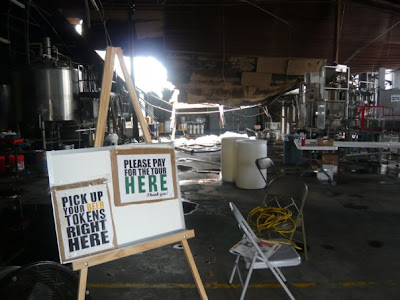 No one was injured in the collapse but the regular Saturday tour and tasting is canceled for this week. Production is suspended until further assessment. 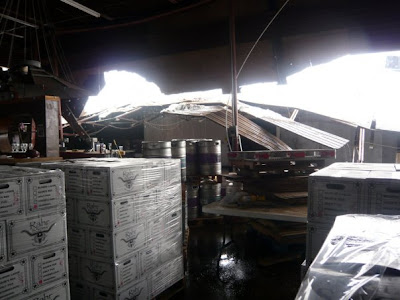 AUSTIN - Yet another start-up craft brewery is in the development stages for Austin, the Thirsty Planet Brewing Company.

Owner and brewer Brian Smittle seems to have already secured a physical location for the brewery in southwest Austin, with no status available for a production date.
Posted by assurbanipaul at 1:56 PM No comments:

Email ThisBlogThis!Share to TwitterShare to FacebookShare to Pinterest
Filed as: Austin, Thirsty Planet

Patrick Beach of the Austin American-Statesman reports that veteran brewer Jordan Weeks has already secured a location for an expected opening sometime in 2011. Weeks is planning "aggressive beers that appeal to the already sophisicated craft beer drinker, people who drink Stone and Avery and Lost Abbey. They’re going to be style-challenging."
Posted by assurbanipaul at 5:26 PM No comments:

SAN MARCOS - Operating as a restaurant and local bar since 2005, the Root Cellar Cafe & Gallery has begun brewing small in-house batches of beer to complement their menu.

Silas Parker, who spent time brewing with Bruce Collie of Wimberley Brewing, will be producing only half-barrel (15 gallon) batches that are bottled (no taps) for both on-site consumption and to-go sales.
Posted by assurbanipaul at 5:11 PM No comments:

WIMBERLEY - Temporarily suspending operations while moving to a nearby smaller location, the Wimberley Brewing Company has reopened as a pizzeria and brewpub.

Email ThisBlogThis!Share to TwitterShare to FacebookShare to Pinterest
Filed as: Wimberley, Wimberley Brewing

BREWERS IN THE NEWS

AUSTIN - Patrick Beach of the Austin American-Statesman gives a summary of what new local breweries Austin can expect in 2010 with his piece, "Make room for more craft brews in Austin."

In addition to the already established Real Ale, Independence, Live Oak and (512), this year introduces a host of new start-up brewers such as Jester King Craft Brewery, Circle Brewing, Hops and Grain, and Moonlight Tower Brewing, as well as the world's first co-op brewpub, the Black Star Co-Op Pub & Brewery.
Posted by assurbanipaul at 4:17 PM No comments: 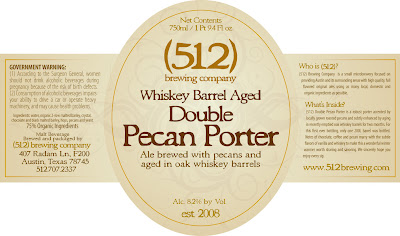 AUSTIN - (512) Brewing has just received label approval from the Alcohol and Tobacco Tax and Trade Bureau (TTB) for their first commercially bottled product, a whiskey barrel-aged and 8.2% "double" version of their popular Pecan Porter.

Only one 200-liter batch was produced of this special beer in 750-ml bottles only, so availability is expected to be very limited. No release date has been announced.
Posted by assurbanipaul at 4:24 PM No comments: 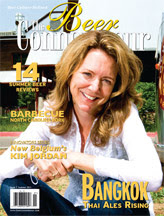